What’s in a Name?

What comes to mind when you think about something at Purdue being named after you?

Thanks to generous Boilermakers around the world, there are thousands of named spaces on Purdue University’s West Lafayette campus. Some spaces are named in honor of people who have left an incredible legacy with the University, including the recent renaming of the Griffin Residence Hall buildings after Frieda and Winifred Parker.

However, many spaces are named by Boilermakers who made the decision to make a philanthropic gift to the University that holds a special place in their hearts.

“Study spaces provide a great opportunity for students to think, create, and collaborate,” says Dr. Jeffrey Kristoff (S’68) when speaking of the space he and his wife, Barbara, named. “We are honored to sponsor such a space in the unique environment of Chaney-Hale Hall for Purdue students today and in the future.”

Named spaces can be found across campus—and some of them might surprise you.

For example, there are atriums and terraces named after donors.

Even a single lane in the Boilermaker Aquatics Center!

Named spaces are funded in a variety of ways. Some spaces are named when donors write a check, while other agreements consist of a blend of lifetime gifts and an estate gift. The cost associated with  naming a space often depends on the age of a structure—active construction often involves a cash gift—and whether or not there is a current capital campaign in progress.

If you would like to leave your own legacy on the Purdue campus, there are a lot of opportunities available now. Some of the priorities include the newly renovated Purdue Memorial Union and the Gateway Building, a new facility in the heart of campus that will vastly expand the instructional space for the Purdue Polytechnic and the College of Engineering.

We welcome having a conversation with you and your family about naming opportunities on campus that might interest you.

Purdue students whose lives were unexpectedly and significantly disrupted by the COVID-19 pandemic received more than $95,000 in critical need funds. 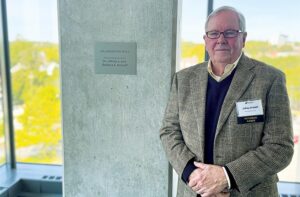 What’s in a Name?

Thanks to generous Boilermakers worldwide, you will find thousands of named spaces on Purdue University’s campus.