During Chiang’s five years at Purdue, he has led his college to its highest rankings ever, even as it has grown dramatically at both the undergraduate and graduate levels. Purdue is currently ranked No. 4 among graduate programs, No. 3 for online programs, and No. 10 for undergraduate education, and is the largest undergraduate program in the nation’s top 10. Both government and industry-sponsored research funding have set new records, as do the 12 national research centers now housed at the university.

Meanwhile, Chiang has played a central role in establishing new relationships with federal agencies in the national security and economic development sectors, and in recruiting new companies to invest and create jobs in Purdue’s Discovery Park District. He spent 2020 as scientific and technology advisor to the U.S. secretary of state on a prestigious Intergovernmental Personnel Act appointment.

Chiang earned a B.S. (Hons.) in electrical engineering and mathematics, and an M.S. and Ph.D. in electrical engineering from Stanford University. He came to Purdue from Princeton University, where in his role as the Arthur LeGrand Professor of Electrical Engineering, he was recognized for a number of innovations in teaching and was the first chairman of Princeton’s Entrepreneurial Council. The holder of 25 patents, he founded three companies and was named New Jersey’s CEO of the Year in 2014. Among many other academic honors, Chiang received the Alan T. Waterman Award in 2013 as the nation’s top scientist under the age of 40 for his excellence in edge computing, internet congestion, cloud and video optimization, and other research areas. Chiang’s research publications have received over 30,000 citations with an H-index of 81. He has graduated more than 50 Ph.D. students and postdocs, including 24 who have become faculty in research universities. His full biography can be read on the Purdue University College of Engineering website.

Chiang will lead a transition of his duties as dean, while continuing his strategic initiatives assignment.

Board of Trustees Chairman Michael Berghoff said, “Mung is the ideal choice to lead Purdue into its next ‘giant leap.’ The board could not be more confident in this selection, as we have had the opportunity to observe his performance across a broad range of duties for five years.

“He has displayed not only academic excellence but also administrative acumen, effective relationship-building with academic, governmental, and business partners, and the skills of public communications. He brings the entire package of talents and experience necessary to take our university further forward. It is no surprise that Mung has been offered the presidency of several other schools, and the board is grateful that his loyalty to Purdue kept him here and available as this time of transition arrived.”

Statement from Dr. Mung Chiang
“It is the highest and most humbling honor to be selected by the Board of Trustees as the next president of Purdue University: the unique and most remarkable land grant institution in the land of the free. Throughout the past 153 years, and spanning from Wabash River to the Moon, generations of Boilermakers contributed to our state, to our country, and to humanity in immeasurable ways. There is no other place like Purdue.

“And there is no other university leader like ours. President Daniels and the outstanding team built Purdue into the most consequential public university in the United States. Under Mitch’s transformational leadership, our university attained the strongest academic reputation, from record-breaking enrollment to all-time-high research excellence, from the Ever True campaign to the transformed campus. Purdue led the country in safely reopening during the pandemic, while its financial foundation is fortified stronger than ever before. But there’s even more. Mitch is also the most innovative president in America: affordability through tuition freeze, 21st century land grant through Purdue Global, and economic growth in Indiana through entrepreneurship and the Discovery Park District in West Lafayette.

“The amazing success of the Daniels’ Decade must continue. While my family and I are blessed with the pride of gold and black, I’m also humbled by a daunting task: to ensure the continuity of today’s momentum into the next giant leaps. I’ve had the privilege to be a part of the Purdue team in the past five years, and to grow the range of service as an EVP, but there’s much more that I need to keep learning, like a student, from each of you. In the next seven months and beyond, my responsibilities start with listening, to students, faculty, staff, alumni, neighbors, and state, national and global partners, to all friends and families of Purdue.

“Neil Armstrong said, “Knowledge is fundamental to all human achievement and progress.” A university creates a time when lives are lifted by student access and success. My own life was lifted out of scarcity because of education. A university preserves a place for all minds in pursuit of open inquiry. And I’m ever grateful for the honor to dedicate myself in service of the talents at our university. As an immigrant living the American dream and as a citizen of this greatest nation in human history, I am also proud to serve, in higher education as I did in the U.S. State Department, the best hope for freedom and opportunity in the ‘shining city on a hill.’

“Opportunities and challenges are intensifying for American higher education, from the modality and value of learning to R&D investment by the government and private sector. We are confident that the entire Purdue system, across all campuses and all units, will innovate together and excel together: one brick at a time, toward boundless potential in the Boilermaker future. 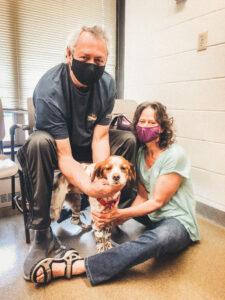