During his time at Purdue, Beering left his mark by expanding its international efforts, growing its liberal arts programs, expanding the West Lafayette campus with numerous buildings and beautification projects, and increasing fundraising.

Beering called on alumni and friends to support the university through numerous building and fundraising campaigns, including having Purdue alumni Neil Armstrong and Gene Cernan – the first and most recent people to walk on the moon – co-chair the Vision 21 campaign, which raised $330 million. It was, at the time, the largest campaign for any public university in Indiana. Building projects completed or planned during his time included the Class of 1948 Bell Tower, Class of 1950 Lecture Hall, Pao Hall for the Visual and Performing Arts, the Black Cultural Center, Knoy Hall of Technology, the Materials and Electrical Engineering Building, Schleman Hall of Student Services, Nelson Hall of Food Science, Hillenbrand Hall, Mollenkopf Athletic Center, a $32 million power plant expansion, and major additions to the engineering, veterinary medicine, and athletics complexes. Plans were begun for the expansion of the Krannert School of Management with a new building that would be known as Rawls Hall. 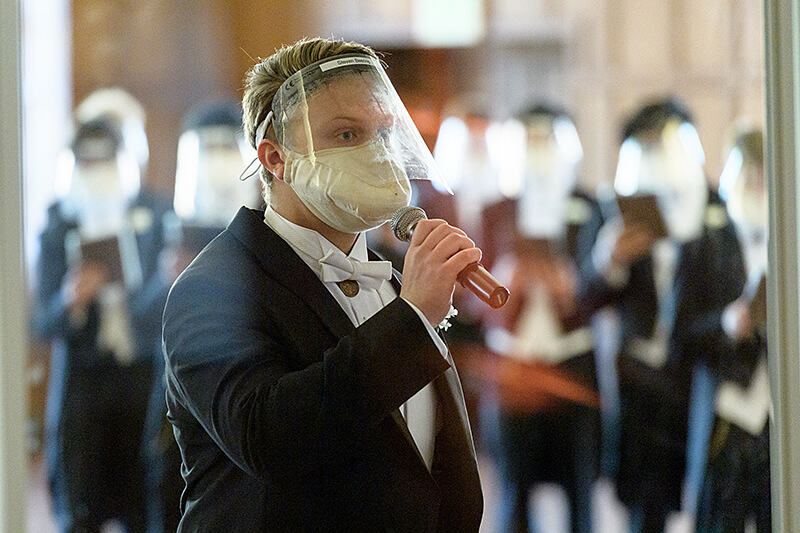 Steven D. Beering, a senior in the College of Engineering and member of the Purdue Varsity Glee Club, sings a solo during a memorial service remembering the life of his grandfather, Purdue President Emeritus Dr. Steven C. Beering. (John Underwood/Purdue University)

Before his time at Purdue, Beering served as dean of the Indiana University School of Medicine and director of the Indiana University Medical Center. He had previously served 12 years in the Air Force, during which time he became an advisor to the U.S. surgeon general in internal medicine and a medical consultant to NASA, where he was a physician to the nation’s first astronauts and to President Dwight Eisenhower. After leaving Purdue, he served on and chaired the National Science Board, an independent body of advisors to both the president and Congress on broad national policy issues related to science and engineering research and education. The Indiana Historical Society named Beering as a Living Legend in 2013 and paid tribute in this video.

Purdue University is a top public research institution developing practical solutions to today’s toughest challenges. Ranked the No. 5 Most Innovative University in the United States by U.S. News & World Report, Purdue delivers world-changing research and out-of-this-world discovery. Committed to hands-on and online, real-world learning, Purdue offers a transformative education to all. Committed to affordability and accessibility, Purdue has frozen tuition and most fees at 2012-13 levels, enabling more students than ever to graduate debt-free. See how Purdue never stops in the persistent pursuit of the next giant leap at https://purdue.edu/.

‘We Are Purdue’: Purdue Day of Giving raises $52.5 million

Taking the theme “We Are Purdue,” the eighth annual Purdue Day of Giving surged past last year’s $42.2 million total to raise $52.5 million, through