How ‘Ever Grateful’ Becomes ‘Ever True’

For Laudan Oloomi, the words “Ever Grateful, Ever True,” are not just lyrics from the Purdue fight song; they are a way of life.

Laudan is a 21st Century Scholar, as well as a Purdue Promise Scholarship program recipient, studying movement and sport sciences in the College of Health and Human Sciences.

The senior from Fort Wayne, Ind., is preparing to graduate in May 2017 and pursuing her dream to succeed as a medical student and, someday, a practicing physician.

In addition to her studies, she’s working toward her goals as an Emergency Medical Scribe at St. Elizabeth Hospital not far from Purdue’s West Lafayette campus.

As the chapter vice president for Purdue’s Medlife medical missions program, Laudan has worked in a mobile clinic in the slums of Lima, Peru.

None of these educational and life-changing experiences would have happened without the generous Purdue scholarships designed to help bright students from low- and moderate-income families in Indiana afford a college education.

Early in life, her immigrant father was a professor at a local college, while her mother raised Laudan and her siblings in a stable, middle-class environment. But in the wake of her parents’ divorce, emotional and economic hardships ensued.

By the time she was a science-loving senior attending an inner-city high school, she was living on her own and working several jobs to pay for her living expenses. Meanwhile, Laudan watched an older sister accumulate staggering college-education debts that led her to bouts of despair about her own plans for higher education.

As for her own college education? “My family could not help financially,” she says frankly.

When she applied for and received her generous scholarships from Purdue, to say she was overcome with emotion is an understatement.

“I was so happy,” she recalls. “It was an emotional moment. I cried for a day. It was an amazing time.”

On campus, there were still obstacles to overcome, but her scholarship program provided her with emotional and academic, as well financial, support.

Laudan’s initial self-consciousness at attending an elite institution eventually subsided, and the confident, compassionate young woman with a passion for helping the less fortunate continues to emerge.

“I can’t begin to describe how grateful I am,” Laudan says.

That does not stop her from trying. She enjoys every opportunity to meet and thank donors who support students in her role on the Purdue Foundation Student Board (PFSB).

As a part of Ever True: The Campaign for Purdue University, PFSB members assist with student philanthropy activities and serve as ambassadors to the University Development Office at special events throughout the academic year.

Laudan welcomes the ample leadership opportunities to interact and share her story with other students, faculty and staff, and alumni — even President Mitch Daniels, the champion-in-chief of the affordability and accessibility crusade for all students at Purdue. It’s a message that has resonated with the Purdue community and elevated Purdue as a leader by example nationwide.

“Place students first” is Priority One in Ever True: The Campaign for Purdue University, and dollars raised for student support hit an all-time high of $70.3 million during the fiscal year that ended June 30, 2016, up from last year’s $67 million record.

When that achievement was announced, Laudan was proud to be the representative student voice expressing thanks: “I am deeply grateful to the generous Boilermaker alumni and friends who, through their giving, grant opportunities for students like me.”

Ever grateful, Laudan looks forward to giving back, continuing to remain ever true to the University that opened its doors and a world of opportunity to help her fulfill her dreams of helping others. 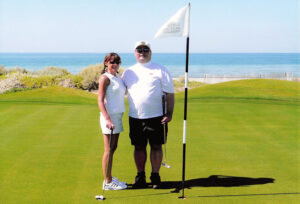 A Fascination With Flight

The late Gregory Rein had a lifelong fascination with flight that led to a successful career as a pilot, and he wanted future Purdue students to have the same experience.

Groundbreaking for a ‘Breakthrough Moment’