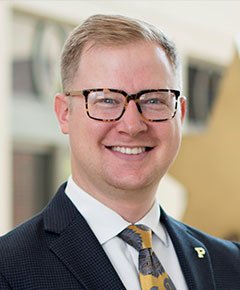 Born in Rushville, Indiana, and raised to be a Hoosier fan—but realizing that Purdue University offered one of the best Hospitality and Tourism Management schools in the country—Lance Connolly earned his Bachelor of Science, becoming a lifelong Boilermaker in 2009.

As the Assistant Vice President for Special Events with the Purdue for Life Foundation, Lance manages a team of event professionals focused on a range of development, engagement and signature university events.

Known for his out-of-the-box ideas and keen design sense, Lance has placed Purdue in a spotlight all its own. In 2017–19 he took on additional responsibility as the Executive Producer for Purdue’s yearlong sesquicentennial: 150 Years of Giant Leaps. This additional role afforded him opportunities to produce international events and bring publicity to the University on a global level, including successfully orchestrating a Giant Leaps event in Mumbia, India.

Lance serves on the Advisory Board for the Academic Event Professionals (AEP) and is frequently called upon to speak to the Council for the Advancement and Support of Education (CASE), Association of Donor Relations Professionals (ADRP) and at national conferences such as The Special Event Conference.

Before joining the University Development Office in 2015 as the Director of Special Events, Lance, a former Varsity Glee Club Member, was Director of Donor Relations and Events with Purdue Musical Organizations, where he led performance tours to Austria, Germany, Switzerland and France along with countless domestic tours.

Lance currently resides in the Greater Lafayette community with his partner, their two daughters, and rescue dog, Sven. When not working around campus, Lance enjoys traveling to new places and entertaining friends and family. “Life is all about experiences” he says, and he intends to partake in as many as he can.

Back to Senior Leadership